Three years ago I was invited to meet with a local authority to discuss advanced collaboration. They had just been informed that the council’s head office was to be sold, so they had to find ways of enabling a workforce that was used to being “in the office” to do their jobs effectively from distributed locations or from home. This required a cultural change as well as new working practices, so new collaboration tools that can help users to make this transition would be key to success.

Recently I was invited to present on “Socialising your Intranet” at the National Communications Academy Scotland event for Scottish local authorities, so I contacted the council to discuss how their project had gone and whether I could use them as a case study. It was great to hear their excitement about the journey that had been on over the last few years. From the start, support from the Chief Executive down had stronger than they expected and they had actively engaged managers and team leaders to become agents of change in their organisations – resulting in over 50 use cases being implemented already, from better supporting community hubs, to transforming the registrar processes, to improving traffic flow on the roads. The final value was much greater than simply facilitating the move from fixed desks to remote and home working that had been their starting point. 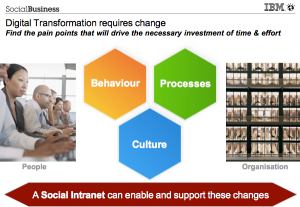 A colleague and good friend, Louis Richardson, likes to explain how much easier it is to sell someone a headache pill rather than a vitamin pill. Sure, vitamins are good for the body, but if you can help to get rid of someone’s headache they will be much more committed taking the medicine and making the changes needed for success. In this case, the urgent need to move to distributed working was the first reason to act, but then using middle management (so often inhibitors for change) as the driving force for a new way to work was a brilliant way of finding more headaches – and curing them.

So what are the headaches your organisation faces? Could better collaboration tools and techniques help to address them? Finding a new way to work has helped many organisations become more agile and adaptive in a changing world. Could you transform your organisation into a more satisfying, more successful place to work.